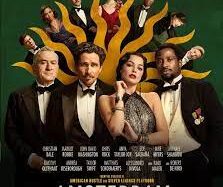 The story of three close friends who find themselves at the center of one of the most secret and shocking plots in American history.
The development of Amsterdam began in 2017 with a conversation between Christian Bale and David O. Russell in a restaurant. The actor recalls, “There’s usually a frenetic rush to make movies, often because of financiers or studio demands to get them out fast.”

“There, we had no time limit. David and I were able to exchange a multitude of points of view. David gave me books where I drew ideas and then brought him extracts from them. There were all these characters who went and came, and all these different encounters that inspired us.”

The director continues: “During four years, we wrote several draft scripts and accumulated a wealth of interesting material. Even if the film is based on historical facts that are as shocking as they are fascinating, we wanted there to be a great friendship at the heart of the plot.”

“From those that people like to have in life and that they like to see in the cinema. As each character has a particular past, that makes him a singular being, with an equally singular existence. All three know how to live and love the life despite its ups and downs. That’s what makes them heroes.”

Finally, the one that was revealed by American Psycho ends: “David intertwined the destinies of these fictional characters with real events in American history. These three friends find themselves immersed in the heart of the war and seal a pact to watch over the on top of each other no matter what.”