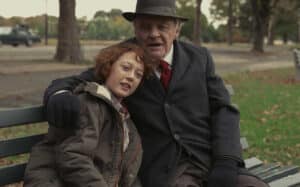 A very personal story of an 1980s Queens boy’s coming of age, the strength of family, and the generational quest for the American Dream.
Another very beautiful film by James Gray, without a doubt his most personal since Little Odessa!

Here, Gray talks about himself in a semi-autobiographical feature film (a bit like what Cuaron, Branagh and soon Spielberg did) where the young Paul Graff, with his head in the moon, wants to be an artist (not a director but a draftsman ), and lives under pressure from his father to succeed in life, while learning about his Jewish heritage.

In short, it is a film about Gray’s childhood, at the dawn of America under Reagan (hence the title of the film).

The result is a plot full of charm (and with humour), before everything gradually slips into a melancholy encapsulated by autumnal Queens (sublime photo by Darius Khondji, reminiscent of Bradford Young’s taff on Arrival and When They See Us).

Gray therefore addresses the weight of responsibility and lies, the loss of innocence, the dichotomy of aiming for a life as an artist (passage in the college financed by the Trumps, with Jessica Chastain cameo during a scene) in a Capitalist America, family dynamics and friendship (with relevant reflection on discriminatory inequalities)

Anthony Hopkins and Jeremy Strong are excellent (it’ll get Oscar nominations), Anne Hathaway is very good, and the young Michael Banks Repetta acts as a revelation