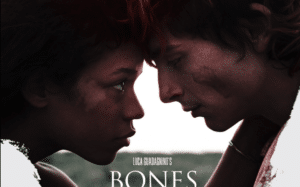 Maren goes in search of her mother and meets Lee, a drifting teenager who will take her on a fiery road trip on the roads of deep America. Will their budding love be strong enough to resist their demons, their past and the gaze of a society that considers them monsters? So hey, I’m a very big fan of Luca Guadagnino whether it’s his films or his series, and I was really expecting this Bones and All: the least I can say is that I’m not disappointed.
The film is a road movie, as much as a coming-of-age story and a romance in a singular context: cannibalism! Set in 1988, we follow Maren, a young girl whose taste for human flesh will force her to flee, in order to find her mother. On the way, she will come across other cannibalistic people, including Lee, a young nomad who is just as lost as she is.
From this meeting will be born a romance, and various adventures in a film with exacerbated sweetness despite the very graphic subject it tackles.
We could approach Bones and All through many prisms, and this is where he excels: the cannibals in the film are ultimately a rereading of the myth of the vampire (their taste for blood comes like a shot of adrenaline, they must learn to control their nature, their sense of smell is overdeveloped and they manage to smell each other even several hundred meters away)
Thus, the film takes the point of view of Maren who is new to this “world”, and wants to be the eyes of the spectator. The film also tackles the search for identity (like any good coming-of-age story), the weight of responsibilities and family ghosts in a melting pot that is quite coherent.
Just like the previous works of the director, Bones and All does not rush, and multiplies the slices of life over 2 months as the duo discovers each other, meets more or less happy (including rather creepy “eaters”) and tries to experience their love. The casting is imperial: Taylor Russell was already a hell of a revelation in the too little known Waves 3 years ago, but here she floods the screen with a delicacy as stunning as the landscapes filmed by the director. Timothée Chalamet (who needs no further introduction) reunites with the filmmaker who put him center stage, and everything still sparks in a much more raw role. And secondary actors level, in addition to small appearances of Andre Holland, Chloe Sevigny, David Gordon Green and Michael Stulhbarg (but which leave a lasting impression, in particular the latter which is the antithesis of his role of reassuring pater familias in Call Me By Your Name), it’s Mark Rylance who impresses (again) in a role at odds with his previous performances (I’m not necessarily going to spoil the nature of it, by the way). Finally, the soundtrack by Trent Reznor & Atticus Ross (my favorite composers) is divinely beautiful once again, reinforcing the soaring and ethereal side of the film, sprinkled with rather surprising graphic projections and gores in a studio film (it’s is by far the most amazing Warner Bros movie I’ve seen in years).