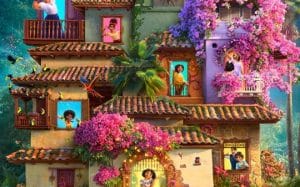 In a mysterious place nestled in the heart of the mountains of Colombia, the fantastic Madrigal family lives in an enchanted house in a city full of life, a wonderful place called Encanto. The Encanto endowed each of the children in the family with a magical ability ranging from superhuman strength to healing power. Only Mirabel did not receive any particular donation. But when the magic of the Encanto is threatened, the only ordinary child of this extraordinary family may prove to be their only hope…

Encanto unleashes negative reviews without real justification. I understand that we are waiting for yet another Pixar like Finding Nemo or Toy Story 3. Yet this film is of the caliber of Zootopia or Wreck it Ralph.
He has his own identity.

Disney is trying more and more in recent years to integrate cultural elements or to be interested in a particular country. Mexico for Coco, Scandinavia for Frozen,… It is true that after interviewing my Colombian friend, some elements are a bit oversold but others are a tribute to Colombia.

Whether it’s the colors, the clothes, the food. Anyone who has a little knowledge of Colombia will see and recognize the easter eggs without any problem. For example the magnificent scene del día de las velitas between the grandmother and the grandfather. Some elements will be less visible to Westerners.

I mean, for example, the influence of weight and traditions on individuals. The family is generally the center and foundation of individuals in Colombia. It is therefore very interesting to see Mirabel defy social conventions and build itself outside established principles. To see the casita metaphorically represent this link between individuals. This may seem trivial to us, but this is not the case everywhere. For more details on the historical period and which helps to better understand the story, here it is.

The story at the time of the grandmother takes place in 1899-1902 or so. It’s the Thousand Days War in Colombia. The Conservative Party and the Liberal Party are tearing each other apart and waging a real war. Between 100,000 and 300,000 people lost their lives in this conflict. My friend told me that each individual was generally identified from one camp to another on his identity papers. Unfortunately many civilians fled into the mountains to escape the violence and many ended up killed as a result. Pedro the grandfather is therefore undoubtedly a villager who belonged to one of the camps or was against it and fled to save his life. It is important to understand this context if we want to have a better reading of the film and Alma’s general attitude. Indeed, having lived through the war and seen her husband being stabbed before her eyes, we therefore understand at this moment why the grandmother becomes so hard. Encanto despite its somewhat lighthearted appearance is in fact an ode to optimism and to the fact of continuing to move forward.

Maybe Encanto could have pushed this conflict further and made it more present. To anchor this family in everyday life and see magic as a kind of escape. I confess to having dreamed a little of the legendary introductory scene of The Hunchback of Notre Dame, I think it could have taken your hair off and brought a real plus to the film. Afterwards, I think there is a bias not to bring too much violence to stand out from the Colombian filmography. Many works are indeed very harsh or deal with social disparities. La primera noche, la estrategia del caracol, etc. Encanto wants to break with this negative pattern and talk about Colombia in a different light. A more beautiful, more natural day. Because it’s not just drug trafficking or corruption. It is also the people, the landscapes, the age-old culture, the love of nature.

To return to the film, it is more than honest entertainment. The visual effects are breathtaking and the atmosphere is light. The music on a reggaeton background mixes well with the atmosphere (not promised, it’s not rap). There has been a lot of research on the part of Lin-Manuel Miranda to highlight Colombian compositions and appeal to as many people as possible. Adding a background of salsa caleña might not have had the same dynamic. I recommend listening to the tracks En Lo profundo and No se habla by Bruno on YouTube to experience the rhythmic arrangements with the musicality of the songs in Spanish. Frankly, it has nothing to do with the somewhat nunuche French version.

The main characters all have their identity and take us on board with them. I must admit that I had a crush on Mirabel and Bruno, the two black sheep of the family and yet full of charms. Mirabel is not a princess. She actually looks like a lot of young Colombians her age. Rather hardworking, driven by good will and very family-oriented. I find it unlike the Annas and other Cinderellas, a bit of a boat that Disney sold us.

I find it very real. She has a lack of self-confidence, shows that she can be angry, disappointed or that she doesn’t like her sister. It’s rare for a Disney to portray a girl with such verisimilitude.

The film is suitable for young audiences and it was not my little boy who complained about it. Quite the contrary. He kept talking about it on the way out. Only one regret, not having been able to watch the film in Spanish.