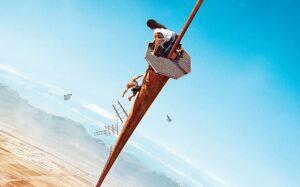 Two best friends, Becky and Hunter, whose life is about pushing boundaries and their fears, want to take on a new challenge: to climb a disused telecommunications tower over 600 meters high. But during their climb, despite their expertise in the matter, the two women find themselves stuck in the tower and forced to survive there without resources, and under a scorching sun.

I wasn’t expecting much from this film, which I imagined had a low budget. But it was a very good surprise!

I regret watching it on a computer screen. The feeling of vertigo is already present.

The moments of tension are well calibrated. For a film of this type, the lack of realism or depth is never ridiculous. We avoid, for example, long dreamlike flashbacks. We even have a few well-rounded little surprises. Like many I found some sequences too short. A little 1/4h more would not have spoiled the show to deal with the end or scenes of exchanges with the father or the former boyfriend. 4/5