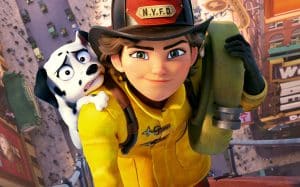 Since she was a child, Georgia Nolan has had only one ambition: to become a firefighter like her father! Unfortunately, in New York in 1932, women were not allowed to practice this profession. When the city’s firefighters disappear one-by-one in mysterious fires in Broadway theaters, Georgia sees a golden opportunity: she disguises herself as a man and joins the team of rookie firefighters tasked with stopping the arsonist! This is the beginning of an adventure as hilarious as it is breathtaking!

No woman has the right to be a firefighter in New York in 1930, this does not prevent the young Georgia, 16, from dreaming since childhood of becoming a firefighter, like her dad was before converting in business for several years.
As a dangerous arsonist rages on Broadway and at the same time makes all the firefighters in the city disappear, this brave and cheeky young girl will decide to disguise herself as a man in order to be hired in the last chance team set up by her father returning to service.
Many difficulties await this brigade mounted with the means at hand…
In terms of qualities, we can say that this animated film is rhythmic, fun and quite moving on the end, in a New York of the 1930s very well drawn and hyper realistic.
The rather jazzy soundtrack is also of good quality.
For flaws, it should be noted that the story lacks a bit of credibility overall and that some characters have been a bit overly caricatured.
But for young audiences, don’t worry: these two imperfections will pass very well, the children will see nothing but fire!
A good movie time full of energy for the whole family.