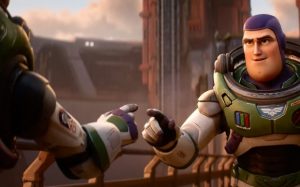 The true story of the legendary Space Ranger who has since inspired the toy we all know. After being stranded with his commander and his crew on a hostile planet located 4.2 million light years from Earth, Buzz Lightyear tries to bring everyone home safe and sound. For this, he can count on the support of a group of ambitious young recruits and on his adorable robot cat, Sox. But the arrival of the terrible Zurg and his army of ruthless robots will not make their task any easier, especially since the latter has a very specific plan in mind…