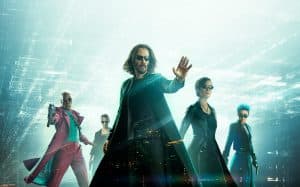 MATRIX RESURRECTIONS plunges us back into two parallel realities – that of our daily lives and that of the world hidden within. To know for certain whether his own reality is a physical or mental construct, and to truly know himself, Mr. Anderson will once again have to follow the White Rabbit. And if Thomas…Neo…has learned anything, it’s that such a decision, albeit an illusion, is the only way to exit the Matrix – or enter it… Of course. , Neo already knows what he has to do. What he does not know, however, is that the Matrix is more powerful, more secure and more formidable than ever. Like a deja vu…

The magic of the first three parts no longer operates in this fourth part. The story struggles to get off the ground and its development remains hopelessly on the surface. No visit in deep waters as the Wachowskis had accustomed us. The philosophical dialogues are confused and lack conviction. The absence of Laurence Fishburne and Hugo Weaving is sorely felt because their replacements lack consistency. Lambert Wilson who in the first Matrix was excellent made in this shutter a short appearance without interest and laborious. Many action scenes are chaotic and have nothing to do with the millimeter-choreographed action scenes of the first 3 Matrix. We once again feel a leveling down as is the case with many current big productions and they all end up looking the same. Too bad, because Keanu Reeves and Carrie-Anne Moss still have potential that obviously could not be well exploited in this disappointing sequel due to poor and artificial production. Some attempts have been made to bring new elements but it looks like copy-paste without any real innovation. We will therefore learn nothing more about the origin of the matrix, the construction of the machines, the operation of these immense human farms, etc. These themes could have been exploited to infuse more substance and depth. In short, one can wonder if the universe of the creators of Matrix has not itself become a prisoner of the matrix of cinematographic formatting.
In conclusion, Matrix Resurrections is a good action movie but without the deep, mysterious and enigmatic character that made the success of the previous chapters.