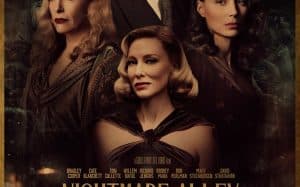 While going through a bad patch, the charismatic Stanton Carlisle arrives at a traveling fair and manages to attract the good graces of a clairvoyant, Zeena and her husband Pete, a former glory of mentalism. Learning from them, he sees there a way to get his ticket to success and decides to use his new talents to rip off the elite of good New York society in the 1940s. With the virtuous and faithful Molly at his side, Stanton begins to construct a plan to swindle a man as powerful as he is dangerous. He will receive the help of a mysterious psychiatrist who could well prove to be the most formidable of his adversaries…

The first minutes that we spend traversing this “Nightmare Alley” may explicitly show us the flight of a man from a past that he has sought to reduce to ashes, the character of Bradley Cooper remains silent for a long time. screen, preferring to blend into the scenery of the circus, where he momentarily finds a refuge and a job alongside his supportive freak figures. It is only following an incident, forcing him to enter the hells of an oh so symbolic attraction, that the character pronounces his first words in front of the less brilliant face of this circus. Because it is the turning point of the film, the one who presents himself under the name of Stan Carlisle has indeed, and without knowing it, to switch into a cycle of self-destruction where the repetition of the errors of the past will leave no possible escape.

Like his character who seeks to get lost in this extravagant environment of the circus and its fairground “monsters” in order to bounce back, Guillermo Del Toro installs the pawns of his story in this whimsical universe in correlation with the cinema that we know him but where, this time, the illusion of the fantastic is confined to the eyes of the naively fooled crowd to leave the front of the stage to charlatanism and its subterfuges which govern behind the scenes. Thus, if at the same time he allows his sad hero to obtain an ability with which he finally thinks he has the existence and the place he deserves in this world, this freak show is also an ideal starting point for the director who is determined to leave his comfort zone in the direction of film noir.
In fact, “Nightmare Alley” may seem to follow a classic “noir” genre trajectory for a long time, focusing on Stan’s learning the ropes of mentalism and then his meteoric rise in the field (in addition to a few agreed sentimental turns) but, in the shadows, the film in reality never forgets to underline each of the irretrievable choices made by a character who condemns himself to the same punishments of a past that he thought he was leaving behind him.

Between the ingenue, then voice of reason, embodied by Rooney Mara and the femme fatale, a real snake with a human face, masterfully portrayed by Cate Blanchett, Stan’s thirst for ambitions forever unsatisfied (Bradley Cooper, perfect) will soon the fact of dragging him into the cold scales of the second to lead him to the final stage of his infernal progression which will engulf him definitively. The last part of this “Nightmare Valley” will be a success in every way, giving Stan a flashback to the height of the consequences of his own darkness and now represented by unstoppable bursts of violence on the screen. Having never ceased to rhyme the psychological journey of his character with the excellence of his staging and his irreproachable artistic direction, “Nightmare Alley” will end on the most inevitably cruel forfeiture to which this cycle thus directed towards the darkest part of the human soul could lead, the mirror of past and future sins that were revealed in the beginnings of the film will have become a sad reality, leaving us with the most terrible of replicas and a laugh of utter despair.