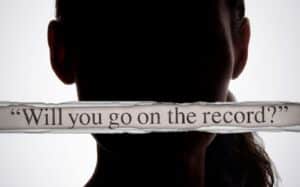 Two journalists from the New York Times, Megan Twohey and Jodi Kantor, have together brought to light one of the most important scandals of their generation. At the origin of the #Metoo movement, their investigation broke decades of silence around the problem of sexual assault in Hollywood cinema, forever changing American society and the world of culture.
She Said is adapted from the investigative book of the same name co-written by New York Times reporters Jodi Kantor and Megan Twohey (played by Carey Mulligan and Zoe Kazan). In October 2017, they published a report on the actions of Harvey Weinstein, in which more than 80 women accuse the producer of abuse or sexual assault (this investigation at the origin of the #MeToo movement).

In 2018, their work was recognized with the Pulitzer Prize for Public Service. The following year, Twohey and Kantor published the book She said: the underside of the investigation which revealed the Weinstein affair and exploded the Me Too movement. The feature film focuses on the work of journalists to expose Weinstein’s numerous allegations of sexual harassment and assault.