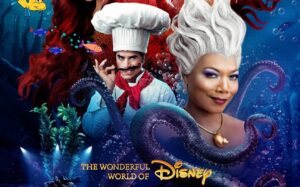 Ariel, the youngest daughter of King Triton, is a beautiful and fiery young mermaid with an adventurous temperament. Rebellious at heart, she is constantly drawn to the world that exists beyond the waves. At the turn of her escapades on the surface, she will fall under the spell of Prince Eric. While mermaids are forbidden to interact with humans, Ariel still feels she must follow her heart. She then concludes an agreement with Ursula, the terrible witch of the seas, which grants her the power to live on dry land, but without suspecting that this pact puts her life – and the crown of her father – in danger…