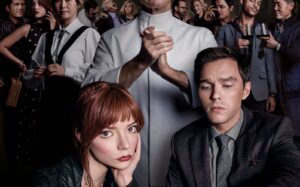 A couple travels to a remote island for dinner at one of today’s hottest restaurants, along with other hand-picked guests. The tasty menu concocted by the chef will reserve surprises as surprising as they are radical…

Appetizers:
An intriguing and mysterious gastronomic thriller served with a host of very good actors, in their roles as guests handpicked to participate in the tasting organized by a prestigious chef and his team retired on an isolated island.

Hall :
A tasty first hodgepodge of dishes thanks to the presentation of the disproportionate ego of most of these guests from the upper class (with a very strong sense of the absurd on some, the blind excitement bordering on madness of the gourmet fan played by a brilliant Nicholas Hoult will be the most noted constant), all in the increasingly anxiety-provoking atmosphere of the cold rigor of the course of the menu proposed by the chef, where the role of unexpected parasite played by Ana Taylor-Joy adds spice to the disconcerted tables.
Special mention to the dish of La Débâcle, turning this “The Menu” in the form of a perfect electroshock to lead to its main dish.

Main course:
The ultimate objective of this tasting revealed against a background of bitter disillusionment and social revenge with a well-thought-out acidity but perhaps not as strong as predicted once in the mouth, also unfortunately embellished with increasingly basic survival adventures ( attempts at leaks & co), much less striking and surprising than during the first services, while waiting for the last act.
Successful peaks of black humor, carried by incisive remarks and the disconcerting reactions of certain protagonists to the situation (as expected, the cast of actors is also a sacred flavor enhancer!), give all its salt to this part of the meal struggling somewhat to completely satiate.

Dessert:
More successful than what preceded, a conclusion having the merit of going to the end of the darkest intentions of this menu (with this sarcastic tone which is now the inseparable condiment) while leaving us on the note deliciously sweetened by the human relationship and the intelligently constructed bridge of insight between the chef and his most unpredictable guest.

Digestive and Addition:
“The Menu” takes us out of the table with the feeling of having attended an undeniably original meal proposal but whose eccentricity has sometimes dried up over its duration, despite the beautiful exit door found by its outcome. We will especially remember the growing fascination exerted during the rise of his first services, his impeccably biting humor and, of course, his cast without whom the atmosphere would clearly not have been the same (we will leave a good tip mainly to Anya Taylor-Joy and Ralph Fiennes but all deserve one).