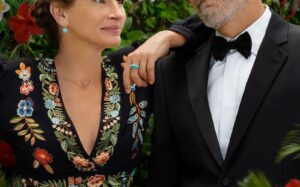 There was a time when this kind of American romantic comedy, starring big names in cinema, was commonplace on the big screen. But, perhaps following too large an interchangeable offer in this area a good ten years ago, this is no longer really the case, to the point that this “Ticket to Paradise” even looks like of dinosaur in its category by tumbling today in astonishing anonymity in the cinema (imagine the impact that a feature film bringing together Clooney and Roberts again in the 2000s after “Ocean’s Twelve” would have had). And, it must be admitted, on our side, it is much more by nostalgia for the genre and its prestigious duo of actors (it will always remain so in our eyes in any case) that we are ready to take this ticket to paradise rather than in the hope of finding some form of renewal there.

Moreover, if renewal you had come looking for, the film by Ol Parker (mainly known for the sequel to “Mamma Mia!”…) will quickly make you understand that there is absolutely nothing to expect from him on this plan ! With its pitch seeing a divorced couple go to Bali to prevent the marriage of their daughter whom he considers unreasonable, “Ticket to Paradise” is a kind of outdated archetype of romantic comedy, with the fixed codes of another era, a little as if someone had come across a script that had been dormant under the dust for at least fifteen years (if not more) and had had the curious idea of ​​adapting it in 2022, ignoring all modernity. Basically, it wouldn’t have bothered us so much if “Ticket to Paradise” had been precisely a worthy representative of the most prosperous period of this type of romantic comedy (we said it without shame, we are also here out of nostalgia )… Except that, even at the time, all of its content would have already seemed very dated to us, both in the terribly predictable exploitation of its premise, the poverty of the majority of its comic situations, its bland adventures romantics and even its threadbare characters. Let’s be fair, a few gags or a minimum of emotion (towards the end) sometimes break the indifference that the whole film can arouse but they are above all to be credited to its famous star couple.

Their obvious complicity (the blooper in the end credits confirms it), their facial expressions, their common charm which remains intact despite the years, their knowledge of the genre which allows them to offer a little more despite the weak writing of their characters… This reunion with George Clooney and Julia Roberts is of course the best (and only?) reason to take a ticket to undergo this comedy from another age, where the class of the first and the smile of the second ( eternal weapon of mass destruction to melt our little heart) manage to pull up the few things that the feature film has best to offer.