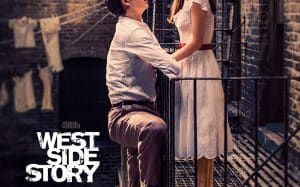 WEST SIDE STORY tells the legendary story of a budding love against the backdrop of brawls between rival gangs in 1957 New York.
It takes balls to remake West Side Story (in my opinion the best musical that cinema has offered), but Steven Spielberg comes to give a lesson to absolutely everyone to surpass the original, but in addition to give birth to one of his all the best movies!

A feat not so surprising when you know that one of the greatest directors in the world tackles a work whose background is even more relevant today.
From this Romeo and Juliet against a background of racial war, Tony Kushner (Munich, Angels in America) multiplies all its impact and its political discourse, brilliantly portrayed by the maestro himself.

The result is a new version absolutely better in everything: emotion, acting, visuals (Kaminski who delivers one of his most beautiful works in terms of photography), choreography (Justin Peck this wizard!)…

So obviously all the cult music by Bernstein and Sondheim is there, but re-orchestrated by Randy Newman and above all better implemented in the story as well as better staged (there are also changes in location, interpretation and sequence order ).

It is also necessary to pinch on many numbers, which are pure moments of cinematic grace (America, the intro with the anthem Jet, Cool Boy or the sequence of ball at the gymnasium are great moments of cinema). From a purely technical point of view, it’s a work of surgical precision and easily in the Top 3 of what Spielberg has offered us in terms of virtuosity and mastery of shots.

Contrary to the film of 61, no colorism, we have a cultural accuracy, a diversified and above all absolutely remarkable cast (everyone dances, sings and plays like big names).
Ansel Elgort (who does the job very well and sings very well) is perhaps a little below the rest (but the direction of his character wants that).
Rachel Zegler (in her first role), with her virginal and angelic aura is perfect in Maria (it looks like a Disney princess coming to life, well, well), Ariana DeBose is incandescent with charisma and talent in Anita (not surprising when we played in Hamilton it must be said), while David Alvarez (Bernardo) and Mike Faist (Riff are 2 revelations (perfect as the leader of their respective gang).
Rita Moreno (who had won the Oscar playing Anita) returns in the feminized role of Doc, and even at 90 years old delivers one of the most touching performances of the year.

In the end, its only limit is to be a remake (so the same story), but told differently, supporting its political and social charge (the aerial intro is on a greyish and ruined West Side, ready to be gentrified unlike the panorama of Manhattan for Wise’s film).

Virtuoso, emotional, brilliantly interpreted, executed with genius, this is the masterpiece of 2021 and the best Spielberg since 2006 (even 1998)!
A landmark film by its author, and let’s not even be afraid of words: the best musical that the cinema has offered!